14.23KB 11 downloads Scribus - Open source Desktop Publishing Scribus is an program that brings award-winning professional page layout to Linux/UNIX, Mac OS X, OS/2 Warp 4/eComStation and Windows desktops with a combination of 'press-ready' output and new approaches to page layout. Underneath the modern and user friendly interface, Scribus supports professional publishing features, such as CMYK color, separations, Spot Colors, ICC color management and versatile PDF creation. Free & Open Source: Scribus source tarballs, MacOSX aqua and Windows installers, SUSE and Redhat RPMS, and some supporting files can be found on the Scribus project's. 4.05KB 0 downloads Scribus 1.4.0 New Year release 2012-01-01 After almost 4 years of intensive work, the Scribus Team has released the new stable version 1.4.0 of the Open Source desktop publishing program Scribus. Given this is the first major stable release in some time, this document outlines improvements over the last number of versions, rather than since just the last one. The idea is to form a general comparison between this and the last stable release. In summary, more than 2000 feature requests and bugs have been resolved since the development of this new version started.

Major changes and improvements in comparison to the last stable version 1.3.3.14 are:. 1.4.0 is based on the Qt4 application framework. The initial transition from Qt3 was performed quite quickly, but fine tuning for cross-platform compatibility and taking advantage of new features took quite some time.

As a result, Scribus now runs equally reliable on all supported platforms. Thanks to the port to Qt4, the Scribus Team now also provides install files for Mac OS X 10.5 or later (DMG or pkg format), as well as a native version for OS/2 Warp 4 and eComStation. Additionally, thanks to feedback from users of other UNIX platforms, Scribus is will build and run on more of those platforms as well. Feature enhancements to object handling (e.g. Transform tools like in advanced drawing programs), with improvements to existing features like the Scrapbook and the Image Manager. Many advanced options for text and typography, like character styles, optical margins, or glyph extension. Undo/Redo is finally available for almost all text-related actions, and a new script enables replacing straight quotes with typographical quotation marks based on language settings.

A new frame type called 'Render Frame' allows for rendering (and subsequently export) the output of every program that can create PostScript, PDF or PNG files via the command line (e.g. LaTeX, Lilypond, POV-Ray) inside Scribus. The initial version of which was developed as a project for Google Summer of Code and this project has developed to allow import of externally produced documents, scientific publications and formulas. More renderers can be added with a simple configuration file. Vector import filters: Scribus 1.4.0 provides new import filters for the following file formats: Adobe Illustrator (both EPS and PDF-based), Macintosh Picture (PICT), Windows Metafile (WMF), Xfig (FIG), Calamus Vector Graphics (CVG), Kivio Stencils (SML), and DIA Shapes (SHAPE).

Regarding bitmap images, the handling of Photoshop files has seen many major improvements, like support of multiple clipping paths or PSD layers. The Image Manager has been rewritten, and new non-destructive image effects have been added. Moreover, Scribus 1.4.0 now supports EXIF data in images, and import of Windows and OS/2 bitmaps (BMP) has been re-enabled. Among the major enhancements to Scribus's pre-press features, printing marks and the display of ink coverage in the Print Preview are the most important. In addition, Scribus now enables conversion of spot colors to process colors during PDF and PostScript export with a single click. PDF export has seen major improvements as well. Scribus can now export to PDF 1.5, including PDF layers.

Another new feature is the option to embed EPS and PDF files in exported PDFs as an alternative to rasterizing them. Also, both font embedding and substitution have been improved. For color management, Scribus 1.4.0 now supports both littleCMS version 1 and 2. It's also possible to enable color management with a single click from the main window. Additionally, the Scribus Team has added a feature to emulate color blindness on screen. Hundreds of minor and major usability improvements have been added. 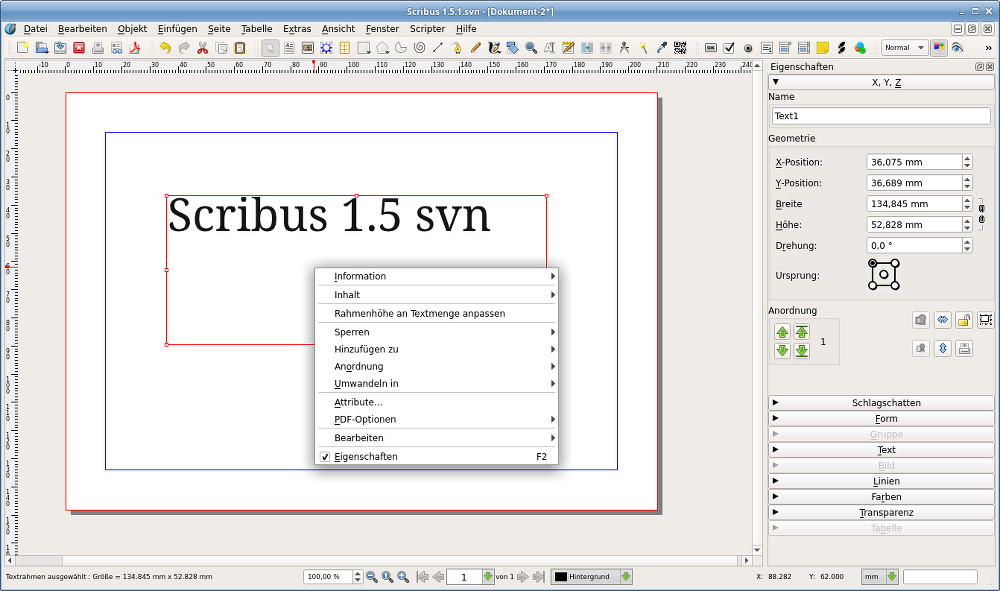 The included scripts have been updated, including the addition of the 'Autoquote' script in the Script menu to convert straight quotes in a text frame to correct quotation marks for many languages. Scribus 1.4.0 is being shipped with many more templates than previous versions. The content of the Help System has been rewritten and updated. Now that Scribus 1.4.0 has been released, the Scribus Team will focus on stabilizing the 1.5 development branch, which will comprise amazing new features like support for PDF/X-1a, PDF/X-4 and PDF/E, Mesh Gradients, native PDF import, XAR import, a completely rewritten table implementation, a rewritten text system, and much more. The 1.4.x version is now in stable/maintenance mode, which means few features will be backported from the 1.5 development branch. In general, only bugs will be fixed in subsequent 1.4.x versions, along with new content, like new translations, new templates, or additional color palettes.

Fixes for text editing issues. Enhancements to scripter. Translation updates. The Italian version of the help documents has been updated significantly. Relocation of profiles and swatches to the share directory of Unix-like systems (linux, OS X, etc) to fit in with the file system recommendations. 3.91KB 0 downloads Scribus 1.4.2 Released January 14, 2013 'We'd like to announce the release of Scribus 1.4.2 with the below information about the release, please also see for the coloured wiki format.Thanks, Craig' Scribus 1.4.2 Released Providing Windows 64-bit Versions and a New Cross-Platform Spellchecker The Scribus Team is pleased to announce the release of Scribus 1.4.2. While this is mostly a bugfix release, it also adds an often requested feature, namely true cross-platform spellchecking.

Until Scribus 1.4.1, the spellchecker worked only on Linux and UNIX systems, including manually built versions on Mac OS X. As of version 1.4.2, Scribus provides a modern spellchecker, similar to LibreOffice and based on Hunspell, which should be easily portable across all supported platforms. Scribus 1.4.2 will detect existing dictionaries already installed by hunspell packages or LibreOffice, on the system it has been installed onto.

Additional dictionaries are downloadable directly from within the Scribus Preferences via freedesktop.org. The spellchecker now also works within the Story Editor. Scribus 1.4.2 is also the first release of Scribus that is available as a 64-bit version for Microsoft Windows. These new versions allow Scribus to access all available memory provided by modern 64-bit computers, which improves performance when working on large documents.

The 64-bit version will run on Microsoft Windows Vista 64-bit, Microsoft Windows 7 64-bit, and Windows 8 64-bit. In addition, Scribus 1.4.2 comes with updates to the Online Help, as well as updated translations. Most important changes -New spellchecker based on Hunspell -64-bit versions available for Windows Vista, 7 and 8 -Documentation updates (including translations) -Updated UI translations -A security update for the Python Scripter (Windows) -Fixes to issues with file locations and file names (Windows) -Fixes and an enhancement to the Scripter -Additional build options -Major and minor bugfixes, ranging from crashes in some corner cases to usability improvements All file downloads.

I went to the first link and found the article below. On the 2nd link I found the driver they talked about. I downloaded it and found that it worked with my Dell Multimedia Keyboard (Y-UK-DEL1). Dell y-uk-del1 drivers for mac pro.

Scribus 1.5.0, the preview of the next stable Scribus release (1.6.0), is supposed to be released for testing purposes early in 2015. Most Important Changes. Scribus is now being shipped with the most recent version of. Updates to the Scripter that enable more control on PDF export. There is also a new command in Scripter, which allows you to apply an existing Master Page.